OS Explorer map 319, Galloway Forest Park South: Glen Trool, Clatteringshaws Loch & Newton Stewart – I own this map, but had not visited it before starting this blog. Visited again for this post 18th July 2018. (This is the tenth of fourteen posts concerning my July 2018 trip to Harris and Galloway with my Cambridge friends.)

So, my previous post ended with my friends and I near the end of our very long day of travelling, taking a break at a pub in the village of Fenwick. From there, as one would expect, we carried on driving. There was about an hour and a half of travelling left to do before we’d get to Creetown, where our accommodation for the next four nights awaited. Unlike the rest of the day’s driving, which had been spent in relative silence or listening to music or radio shows, as we passed through Ayrshire and Galloway we were a little more active, passing around the Annal, the collaborative diary that we’d kept on the Holy Island Trek, on our trip to Paris last year, and on this trip. After that we amused ourselves by reading out loud from the amusingly bad novel A Discovery of Witches. [1]

We had one final stop to make before we could reach our caravan park in Creetown; this was a stop for provisions in the nearby town of Newton Stewart. We therefore rolled exhaustedly into their Sainsbury’s and purchased supplies for that evening’s lazy dinner of vegetable burgers and chips. 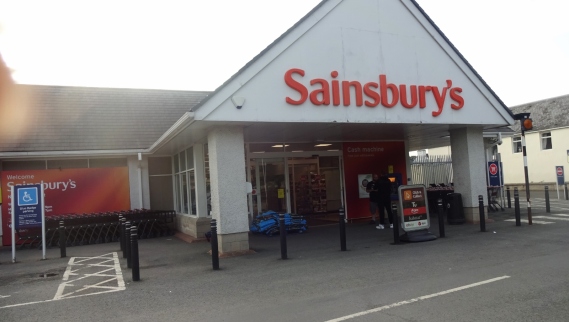 In the car park

Some excitement was had when we noted that next to the Sainsbury’s was the Belted Galloway Discovery Centre – Belted Galloways being a breed of cow that we particularly love (see my Bewcastle post) – although, disappointingly, later researches showed that the Discovery Centre was little more than a café with a few cow photos and information boards on the wall.

From the Sainsbury’s we got back into the car for the final ten-minute drive out of this map area, and to the caravan park that would be our home for the next few days.

We returned to Newton Stewart a couple of times later that week, to use the Sainsbury’s and the Aldi, and in one case to scout out the menu of a Chinese takeaway that in the end looked unappetising enough that we gave it a miss. However, three days after our arrival, on Saturday the 21st, Millicent, Vesper and I did something more notable in this area when we visited the Galloway Wild Goat Park.

Now, I really like goats, my phone background is a cute baby goat, I just think baby goats are the most wonderful cute little creatures ever. I was therefore quite excited to go to this place. 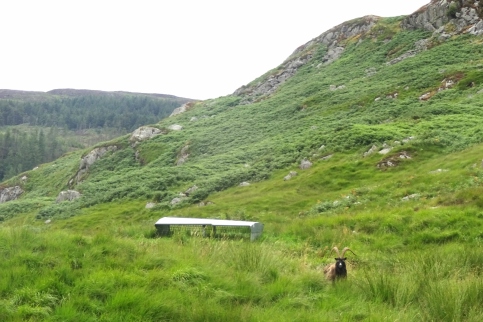 I’d passed it earlier in the day when driving back from Glasgow – I’d been there to drop Erithacus off at the airport for her flight to Italy, and had then met up with my school friend Geochunderer for a little while before returning – and was eager for a trip. In the end, though, it was a bit disappointing. There was a magnificent goat, with shaggy hair and huge huge horns, but there was only the one, and the Goat Park itself was just a round gravelly car park without even any information signs. But still, I saw a good goat. I won’t complain.

[>1] Now, there is an amusing tale there. Vesper and Erithacus, you see, had read that novel in the past, and had talked various times about how bad it was. A few months ago, when I was in Oxford, I went into Blackwell’s bookshop, and picked up two books in the science fiction and fantasy section that I wanted to buy. However, at the checkout, I was informed that I had picked up two books in the three-for-two deal, so I could have another for free. In a panic I picked up one without properly looking at it, A Discovery of Witches, not remembering the title from the tales of warning I had heard. It was several weeks later when I, in Vesper and Erithacus’s company once again, shared with them the tale of this shop experience, and, upon my revelation of my purchase’s title, they immediately fell about laughing. We agreed that, it being so bad, I would read it on this Harris trip where they could support me through it and, while that didn’t happen, we did do the car-reading.