OS Explorer map 439, Coigach & Summer Isles: Inverpolly – I do not own this map, nor did I ever visit it before starting this blog. Visited for this post 25th March 2018.

My last post had the Dearest Progenitors and I departing Lairg after having stopped there for lunch on our way to Ullapool, from where we would be getting the ferry to Stornoway for our stay at our cottage on Harris. (See my South Harris post.) From Lairg, we went back to the A837 to continue driving west.

Now I’d previously looked up things that we could do on the way to the ferry, and the one thing I’d found on the route was a “Chambered Cairn”, a Neolithic burial structure, marked on the OS mapping of the area, near the road on the northern shore of Loch Borrolan (I was using the online OS Maps service); I later found a tourist webpage about it, and various archaeological reports.

Anyway, when we came near it, we stopped the car and Father Dearest and I tried to climb up to it. Father Dearest gave up about halfway because it was rather boggy and he didn’t have waterproof shoes on, but I got there.

There was a fence that had been erected around the whole thing, I suppose probably to keep the animals out, as I doubt many people come to it, since it’s not even signposted from the road. Hoping that I was allowed, I climbed over the fence and had a closer look. It no longer has a roof and the entryway has collapsed, but one could clearly see down into the chamber. Someone seemed to have left some blue fenceposts or something in there!

But yes, from there I clambered back down to the road, got in the car, and we continued our drive to Ullapool, where we checked in and awaited our ferry. I had originally had an idea that we might go a little way north first and have a look at Ardvreck Castle, but time was marching on and, alas, it was not to be.

We ate dinner on the two-and-a-half-hour ferry ride – Calmac ferries always have fairly pleasant food – and upon arrival in Stornoway at once made the hour-long drive down to Harris where our little cottage is. 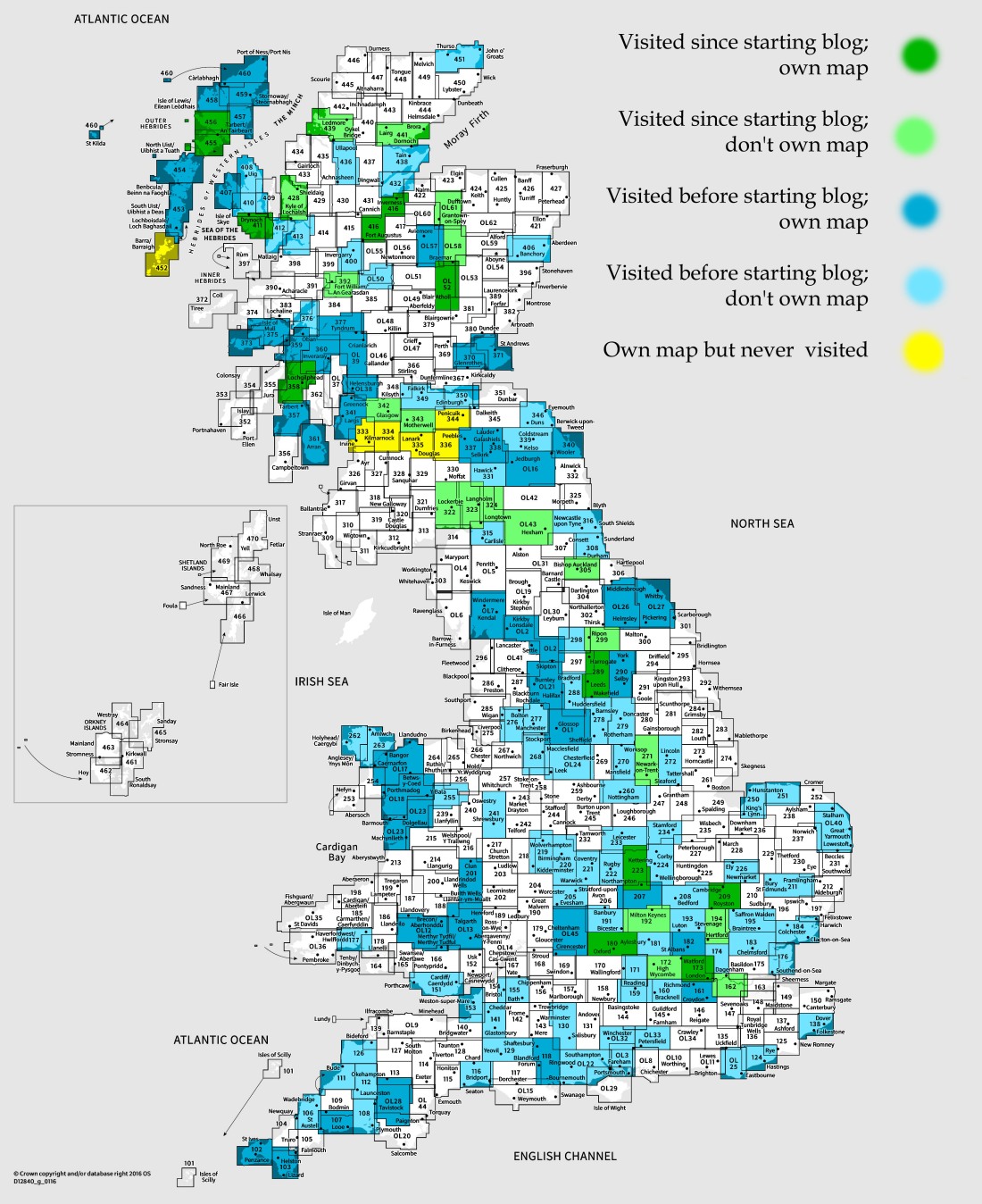 Greetings all; I am a person about whom many things are true. What is relevant about me for my blog profile, however, is that I have an ambition to visit every Ordnance Survey Explorer map area in Great Britain, and write about that on the internet! View all posts by Amrit

A woolly traffic inspector!
I try to impersonate a greetings card
Naturally when I saw a place called "Goat Prison" on my map I had to go to have a look! It (third photo) turned out to be a a place where a little river canyon widened out into a big sort of craggy hole in the ground – which I indeed imagine a goat might find it somewhat harder to get out of than otherwise. (But then, goats are great at climbing, so I expect they'd probably manage it.) Unfortunately it was very full of trees so, while very dramatic to look at in person, is quite hard to appreciate in a photo. However, the surrounding hills come across quite nicely!
A fine piece of work from traditional binmakers, Dogit and Binly (est.1536)
A flowery field!
It is unfortunate that my car broke down irreparably a couple of months ago, but I have to say I'm quite pleased with this new solution for transporting click-and-collect shops! It's surprisingly easy to pull and to control.