OS Explorer map OL61, Grantown-on-Spey & Hills of Cromdale Upper Knockando & Tomnavoulin – I do not own this map, and have not visited it before I started this blog. Visited for this post 27th December 2017.

This entry continues directly on from the previous one, as my parents and I drove along the A939 to Grantown-on-Spey, having had a bit of a driving mishap in the snow. We wanted to stop in Grantown in the hope of it having shops where we could acquire a beard trimmer and some tracksuit bottoms for Father Dearest. Now my beard was indeed in need of a trim, as I hadn’t been able to trim it since coming home for Christmas as I left my trimmer in Cambridge. (I had, for some reason, remembered to bring the charger though…) I normally trim every two to four weeks, and I suppose it’s been about five now; I am looking a little scraggly. However, I was adamant that I didn’t need to buy a new one or anything; I’ll be back in Cambridge on the 4th, just over a week away, and I could definitely wait until then. But my Dearest Progenitors decided that one should be purchased anyway, as we didn’t have one at the Harris cottage, so it could stay there, and then I could make myself appear a little more respectable as a bonus. The tracksuit bottoms were similarly so that Father Dearest, who to my eternal dismay is a regular wearer of the things in general life and was indeed wearing some that very day, could have a pair to leave up at the cottage.

So yes, we drove into Grantown and parked up, having spied a pharmacy. Mother Dearest slipped in the snowy car park, but fortunately no damage was done, and we went into the pharmacy and bought a beard trimmer. (Or “strimmer”, as Father Dearest calls them…)

Father Dearest and I left Mother Dearest to sort out payment while we scouted up the high street looking for a shop that might sell tracksuit bottoms. We were unsuccessful, although there was a country clothing shop that I found sold plus fours! It was at this point snowing rather heavily.

Despite our failure on the tracksuit front, we did, upon seeing a pleasant-looking café called The Wee Puffin, decide to stop there for lunch. (We had originally planned to drive on and lunch in Beauly, but it was half past one by this time and taking another stop seemed inadvisable, plus going via Beauly would add 15 minutes to our total driving time. Beauly and its ruined priory and very short-platformed train station would have to wait for another trip!) The Wee Puffin was really lovely! There were pictures of puffins all over the place, and my family love puffins – Mother Dearest was very jealous when I got to see some in Iceland two summers ago. We purchased a little puffin statue for the Harris house (where there is already one puffin statue, and a puffin cushion and a couple of puffin paintings and prints). The food was nice too! 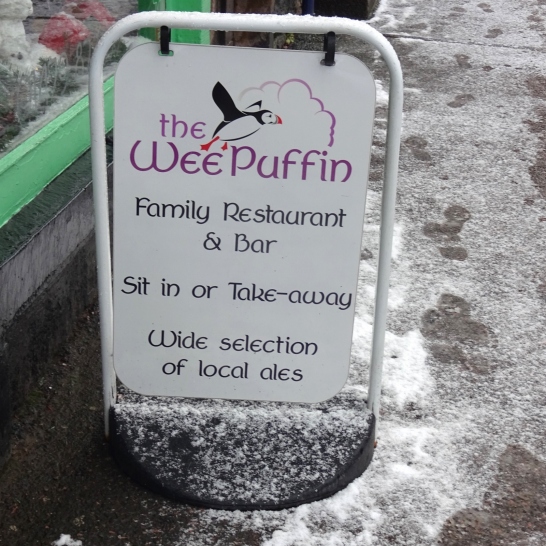 After lunch, we took the car to a little garage, recommended by the shop assistant in the pharmacy, because although we were sure the damage wasn’t serious, there was a bit of the side-bumper thing that had moved and was threateningly close to touching the tyre. I had a brief adventure into a snowy tennis court that I thought was a back way to the car park while the Dearest Progenitors fetched the car, and then the garage fellow removed the offending bit of car. 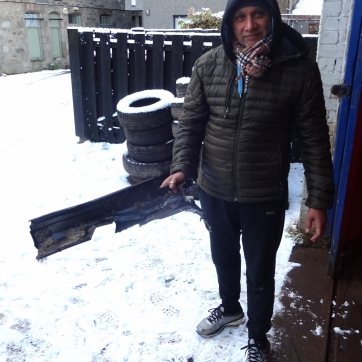 Father Dearest with the offending piece of bodywork

There was a brief bit of confusion over the function of a little wire that was now hanging out; there were no lights or sensors we could see that it connected to but we decided to ignore it. (The garage man, whose accent Father Dearest was unable to understand despite it being perfectly clear to the other two of us, [1] eventually decided it was probably a crash sensor for activating a side airbag.) We then got back in our car and started driving once more in the direction of Inverness, fortunately on less snowy roads, at least at first. The tale will continue, of course, in my next post!

[1] But of course Father Dearest is not a native speaker of English, which is easy to forget since he’s so good at it and we very rarely speak anything else.

One thought on “OL61: Grantown-on-Spey”