OS Explorer map OL58, Braemar, Tomintoul & Glen Avon: Beinn a’ Bhuird & Ben Avon – I do not own this map, and have not visited it before I started this blog. Visited for this post 27th December 2017.

This post continues directly on from the previous one, with my parents and I driving up the A93 in the Cairngorms National Park. We continued north from Braemar, passing the 17th-century Braemar Castle without stopping there. We soon after saw on the left a very attractive looking castle, more modern-looking too, very large, and wondered whether it might be Balmoral, since we knew that to be in the area, but we didn’t think that was visible from the road. This suspicion was confirmed later when we passed Balmoral itself. We turned left onto the single-track B976 to cut a corner, at which point things got rather snowier. I got out briefly to take these pictures and was instantly smacked in the face by wind. 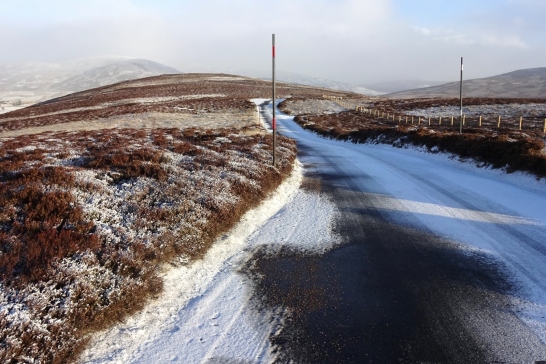 On the A939 we continued driving, [1] and entered this map area at the amusingly named Cock Bridge. [2] We soon stopped for a wee and tea and carrot cake break at the cafe of the “Lecht Activity Centre”, a skiing place. I was pleasantly surprised to see Gaelic signage there, which I wasn’t expecting to see any of before Inverness, and it was by a private business too! [3]

The sign in question. I would assume “tigh beag” or whatever the nominative singular would be literally means “little house”. 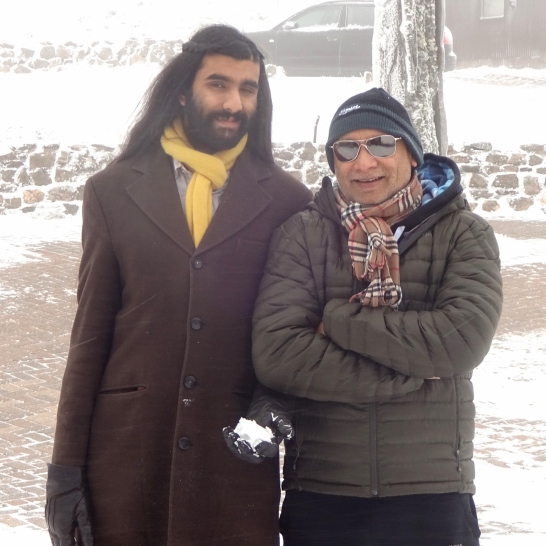 Me and Father Dearest in the car park. The snow was really nice snow – vēry sticky.

As we got on the way again, a sign informed us that we were now entering Moray (and thus leaving Aberdeenshire). Now comes the DRAMA as, with things getting snowier and snowier, on a steep downhill section, our car slipped and went, with some alarming crashing noises, entirely off the road! Fortunately Father Dearest recovered control quickly and got us back on, and stopping and inspecting the damage revealed that the only casualties were one parking sensor and a broken bit of bumper. (Or not bumper, what is the bumper-like stuff that forms the bottom edge of the car but on the sides of it, under the doors, rather than at the front or back, called?) At this point we realised that it would be wise to activate the “off-road mode” in Mother Dearest’s car, after which things went altogether better, with no further significant slips.

After Tomintoul we passed one of Britain’s hundreds of rivers called River Avon, [4] on a very impressively humped bridge. Then, shortly before Grantown-on-Spey, we left this map, so see the next post!

[1] The preponderance of road-numbers in this post that begin with a 9 is of course due to the wondrous thing that is the Great Britain Road Numbering Scheme!

[2] From Braemar the driving had been almost entirely in map OL58, with a little in OL59, neither of which I have visited yet so will presumably be coming back to! (Remember that according to The Rules, just driving through a place doesn’t count, and I don’t think I can count getting out of the car just to take one picture either!)

[3] When I Wikipedia’d Blairgowrie, a town that we’d driven through the previous day and had found very pleasant, I did however find that it, considerable further south and still in the East, unusually had Gaelic on its road signs, which I had missed while driving through. The article on Braemar also had a brief note on its unfortunately (but not surprisingly) extinct Gaelic dialect.

[4] Avon being the Anglicisation of the Gaelic and Brittonic words for “river”. (Brittonic = Welsh, Cornish, or the related languages/dialects that were once spoken rather more widely. In this region, maybe Pictish, but whoever even knows what that was.) Now the map informs me that the valley of this river is called “Glen Avon”, leading me to wonder whether this could really be the Gaelic name for it, since “River Valley” seems rather generic, and it seems extremely unlikely that an older Brittonic-based Avon would have been untransparent enough for the Gaelic-speaking locals not to see it for what it was. (The Wikipedia page for the river confirms that the source of the name is Gaelic, assuming one trusts it for such things.) Some Wikipedia-ing finds that the river starts off at Loch Avon or Loch A’an, and nearby is Ben A’an; again unlikely names. But, ah, on the page for Ben A’an, I see a useful section called “Name”: “The name “Ben A’an” is an erroneous Anglicization by Sir Walter Scott. Its original name is uncertain”. I’m inclined to think therefore that the loch, glen and river names are similarly purely English/Scots ones and that Gaelic-speaking locals probably called them something else entirely.

Now 〈bh〉 in Scottish Gaelic remains a fricative /v/ whether palatalised or not, unlike in Irish where it has often become /w/ or disappeared entirely when non-palatal. This threw me off initially, as I was thinking Irishly, and thought Avon could only be a reasonably early Anglicisation of abhainn because I was imagining it as /awaɳ/ or something, but no. (That fact comes from Wikipedia on Scottish Gaelic phonology, a page I’ve looked at many times but failed to remember much of. Despite studying Old Irish at university for two years, and Celtic philology for one, I’ve only done a little bit of modern Irish, and no Scottish Gaelic even though I see a lot of it going to Harris so often. I do hope to change this situation over the next couple of years, especially if I’m going to be applying to research a Celtic languagey topic for a PhD as is my current plan, so we’ll see how that goes!)

So, after about 3 years of being a long way behind, I've finally caught up with my blog, woop woop! As in, I've now written a post about every Ordnance Survey Explorer map area I've visited between starting the blog and now.
It's quite snowy up here! For some reason having snow in my beard and moustache makes me feel like Gandalf.
This lion has a moss hat!
A woolly traffic inspector!
I try to impersonate a greetings card
Naturally when I saw a place called "Goat Prison" on my map I had to go to have a look! It (third photo) turned out to be a a place where a little river canyon widened out into a big sort of craggy hole in the ground – which I indeed imagine a goat might find it somewhat harder to get out of than otherwise. (But then, goats are great at climbing, so I expect they'd probably manage it.) Unfortunately it was very full of trees so, while very dramatic to look at in person, is quite hard to appreciate in a photo. However, the surrounding hills come across quite nicely!