OS Explorer map 416, Inverness, Loch Ness & Culloden: Fort Augustus & Drumnadrochit – I own this map, and have visited it before starting this blog. Visited again for this post 25th March 2018.

So I am currently on another trip with my parents to my family’s holiday cottage on the Isle of Harris (see my South Harris post). This time, instead of driving all the way up from home (which takes about ten hours to the ferry so has to be done in two days really), or flying to Stornoway, which requires a flight change, we decided to get a flight to Inverness and hire a car there to drive the rest of the way.

So, we arrived at Inverness Airport from Birmingham at about quarter to one, only slightly delayed, and collected our bags and then our hire car and were off. Our first destination, and the only one in this map area (airports don’t count according to my Rules), was, not very excitingly, Inverness’s branch of Tesco Extra.

There are a good few food shops on the Harris and Lewis, including a proper supermarket-sized Co-op in Stornoway, through which we’d be passing later that day because we were getting the Ullapool-Stornoway ferry, however it was a Sunday, and so all of the shops on the islands would be closed. Mother Dearest and I bought various bits of food while Father Dearest stayed in the car. We also procured a couple of duvets and pillows, since I’ll be coming to the cottage in July with my friends Vesper, Erithacus, Millicent, Queenie and Cheremy, and we’ve never had more than four people in the cottage before so we’d need some more bedding.

From the Tesco, we got back into our car and were off northwards, planning to take a roundabout route to Ullapool via Lairg since we had a good long while before our 18:30 ferry, and it’s always nice to see new places!

This map covers Inverness, but also the whole of Loch Ness down to Fort Augustus, and I’ve visited the area several times before.

I am entirely certain that the first time was in 2003, when I, eight years old, came to the Highlands with my uncle, aunt and cousins, staying in a cottage near Cromarty; that trip featured in my Fort William post. One day we drove down to Fort William, along Loch Ness, and thus spent some time in this map area. Obviously I don’t remember the trip in great detail, it being so long ago, but here are some pictures of Guacamole and I looking cute and young as we stick our heads out of the car’s sunroof and look at the Loch. I recall that we visited some kind of Loch Ness visitor centre where there was an exhibition about the monster. There does also exist an hour-long video of this trip, but, excusing myself as I did last time I mentioned this trip, I can’t really be bothered to look through it right now… 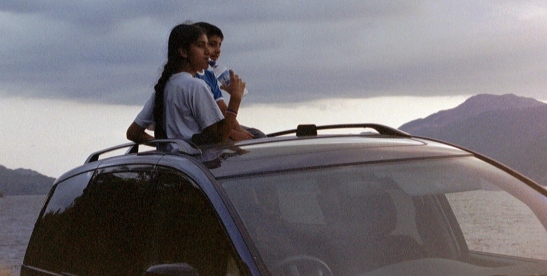 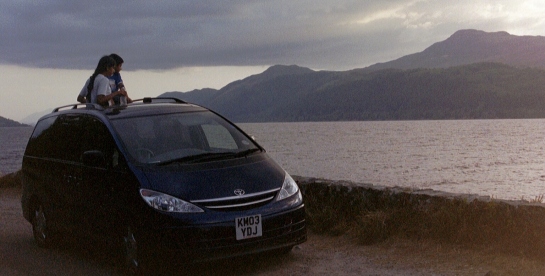 Now, I spent rather a long time in this map in summer 2014, when I went on a two-week driving and camping trip around Scotland with Cabbage, Climbing Programmer and Joystick. Having spent two days in Edinburgh, two on the Uists and three on Skye, we stayed in a campsite in Fort Augustus, at the south end of Loch Ness, for five nights. While there, Geochunderer joined us for a few days.

To collect Geochunderer, we went to Inverness station, and then, having found him, went off to spend the day on a beach on the Black Isle somewhere. (Off this map.)

Other day trips from Fort Augustus included to Aviemore and the Cairngorms, and to John O’ Groats. One day we went into Inverness to watch Guardians of the Galaxy on the cinema, but I seem not to have taken any pictures there. Our evenings were in Fort Augustus at the campsite generally, cooking on our camp-stove to a varying standard, mostly using food from the rather underwhelming Co-op in Drumnadrochit. I recall a chicken curry where the pot was too small to fit all of the chicken, so we had to have some plain boiled chicken legs afterwards, and a rather average pasta and meatballs that used pre-cooked meatballs in tinned tomatoes. (We had had a wonderful carbonara by Joystick on Skye though, who, having gone on a cookery course a couple of years before, has some skills in that department.) 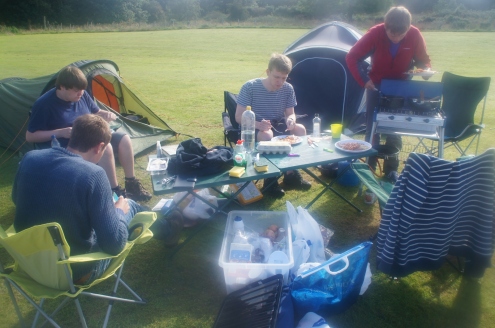 Eating at the campsite 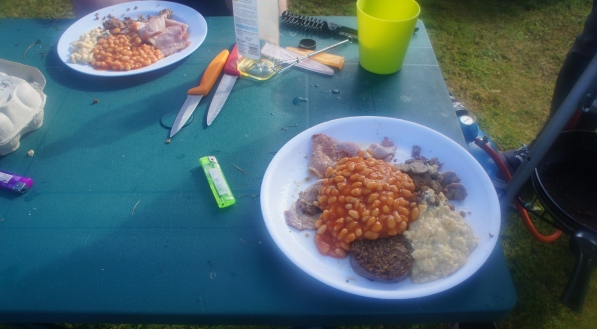 One day though, we did go out for dinner at a Fort Augustus restaurant, Joystick’s parents having kindly offered to pay for that.

To mention something amusing from this trip, below is a picture of a coconut with a face drawn on it. At some point on the trip, we bought this coconut intending to eat it. However, the application of all of our tools and ingenuity failed to get us into it. Therefore we resorted instead to drawing a face on it and adopting it as a pet. We, in the end, named it Sanjit. The source of this name is that one of my school chemistry teachers was for the first few months that she new me utterly unable to remember my name (Amrit), always instead calling me Sanjit, presumably after some previous student. Since it was opined that the coconut’s moustache and beard looked a little like a certain kind of overly-waxed Indian, Sanjit it was.

Sanjit is pictured in his spot in Edith, my Fiat Doblo of the time. Even though Edith sadly met her demise in March 2016, Sanjit moved to my new car, Hilda, and still lives on the rack above the windscreen there! Also visible are several knobs – my car had (and my current car has) a load of totally non-functional but very satisfying knobs and switches along the top of the windscreen, labelled with such science-fictional things as “warp drive”, “universal translator” and “activate spare hairdryer”. ‘Tis but a bit of fun.

I also came to Fort Augustus in December 2015, with Mother Dearest. This was when we had just bought our Harris cottage, and we two were driving up from home for the first time, with a carful of furnishings. Father Dearest was to fly up and join us there a day later. The plan had been to take the ferry from Uig on Skye to Tarbert on the 7th,  however Storm Desmond got in the way (they had only very recently started naming storms at that point), leading that ferry to be cancelled. Mother Dearest and I, having stayed the previous night in Fort William, decided to drive on to Fort Augustus, where we could make the decision on whether to go to Uig and hope that the ferry would leave eventually, or to drive to Ullapool in the hope of catching the Stornoway ferry in the evening.

There we had some tea in a greasy café that served a bewildering array of fried products and made our decision: we would go to Ullapool. Before leaving, we looked around the shops, and bought some whimsical coasters with sheep on them and ewe-related puns (such as a drawing of a sheep driving a racing car, captioned “Form-ewe-la One”), and some soft tartan blankets. We then drove to Inverness, since it’d be a while before the Ullapool ferry and it didn’t make the way that much longer. There we had some lunch in a restaurant, the Rocpool, that had been recommend to us by the fellow who looks after our Harris cottage – it was indeed very nice. We also looked around the shops a little, buying some spices in the little covered market thing near the train station – this is the only time I’ve spent any time in Inverness town centre, despite having passed through many times and used the train station. Storm Desmond’s work was again visible, as the river was very high! 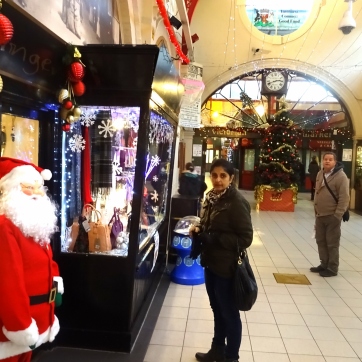 The market bit in Inverness 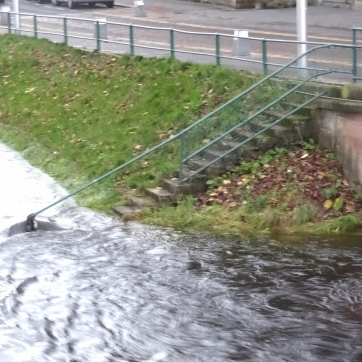 The river was very high! 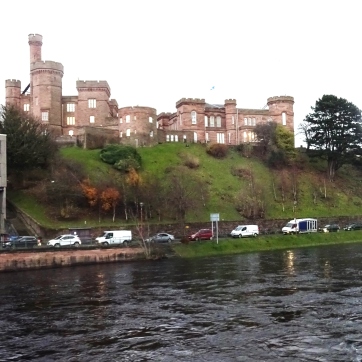 Looking over at Inverness Castle

From there we carried on driving to Ullapool where we ended up staying another night, as that ferry was cancelled to – we finally got to Stornoway the next morning, just in time to collect Father Dearest from the airport.

I’ve been to Inverness Airport several other times, whether changing flights or starting or ending my air journey there, but of course, if I don’t leave the airport it doesn’t count as a visit. Nevertheless, here is a picture of a plane from one time when I was at the airport. 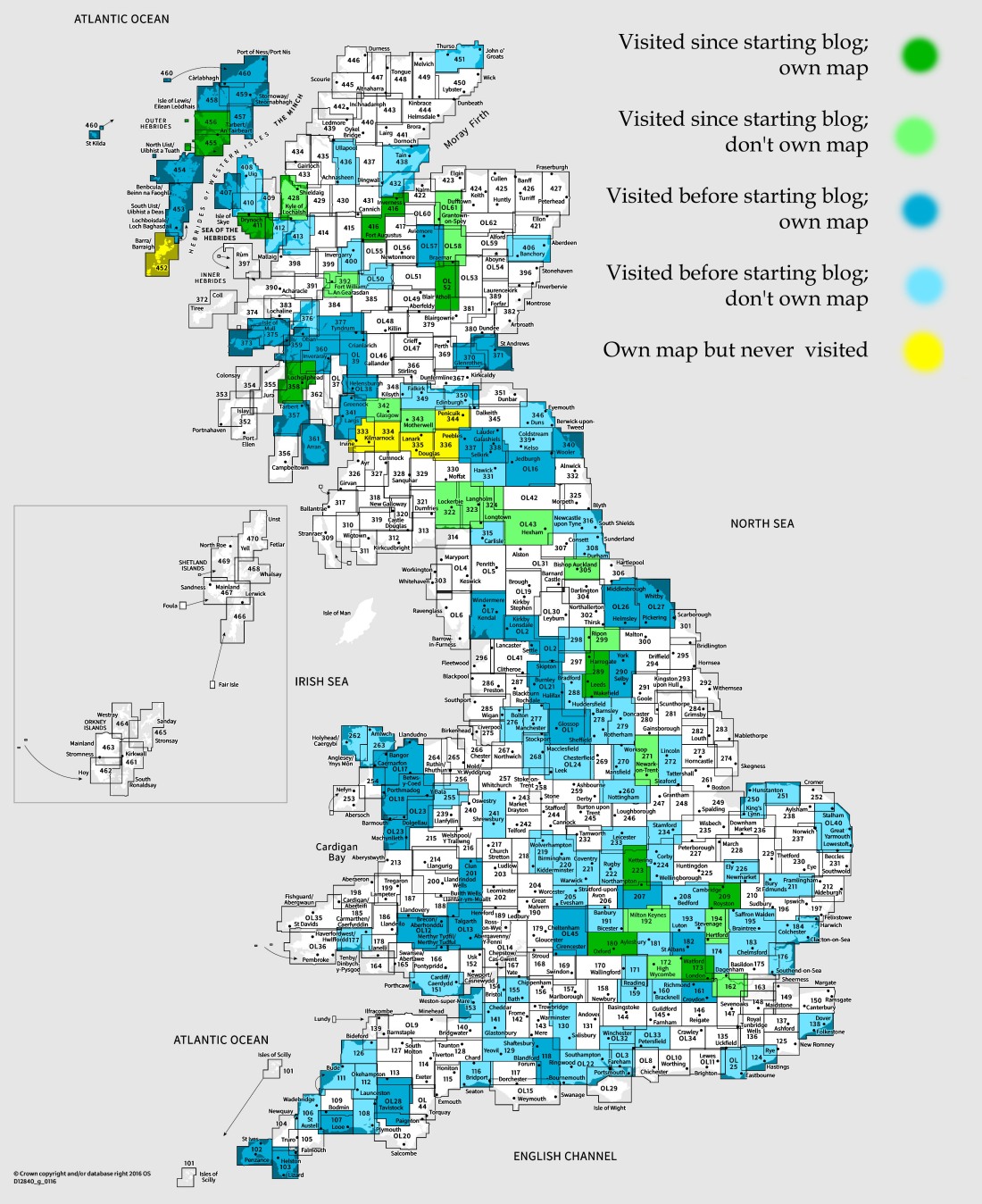 [1] Cabbage’s tent was very short, such that I couldn’t have lain down in it, and Climbing Programmer and I expressed our distaste for it, since it was also only one layer think, having no tent inner, meaning that it probably suffered greatly from condensation. However, er, we were apparently doing this rather brashly and too much, as Cabbage fairly enough found it somewhat annoying.